This post is an introduction to the method of inductive reasoning and the problem of induction. It also introduces an interesting answer to the problem, called cross-induction (this post is more or less a transcription of a video that I made a couple of months ago, feel free to check it out:)


Why do you think there's going to be a tomorrow? The future is uncertain. You don’t know what it brings. But still you make claims about it. Claims like:


We don’t know that. But still, we all believe that. Why? What’s our rational justification for believing anything about the future?


One answer is, we look at the past and learn from it. The sun rose every morning in the past. So, one would expect that the same will happen tomorrow.

And that’s basically how we infer the laws of nature. We experiment, and see what happens. And we learn from that, supposing nature always acts in the same way that we observed. We call that inductive reasoning, or induction. It’s the inference from past examples onto future ones. Or, more technically, from observed instances onto unobserved ones (since time is not the only limitation to what we can observe).

But, can such reasoning be mistaken? Imagine a chicken living on a farm and being fed every morning (the following illustration was put forth by Bertrand Russel in his book Problems of Philosophy).

When it sees the person who usually feds it, it expects food. And it’s pretty confident that it will get food, since it was careful to examine the occurrence of food under different conditions. It got fed when it rained, when it was sunny, when it there was snow, whatever happened, it always got fed. So, the confident chicken walks up to the farmer and gets its neck wrecked.

So, regarding past experiences, nothing could prepare the chicken for a sudden shift in the relationship it seemed to have with the farmer.

This is a problem that perhaps most famously David Hume (1711 - 1776) observed about inductive reasoning: it does not lead to true knowledge. Whatever we observe, strictly speaking, we know nothing about what we didn't observe. In this instance, the future.

Given the uncertainty of the future, how might we rationally justify inductive reasoning?

Well, one thing to point out is, that inductive reasoning usually works. For example, scientific laws, inferred from different experiments, are usually successful when predicting the future. So was I, every time I told my friend that the sun would rise the next morning. But, so was the chicken, on the day before the slaughter, getting just another confirmation that it will get fed every morning forever.

So, this line of thinking doesn’t seem to answer the problem.

We call that The problem of induction - the problem being that there seems to be no real way to rationally justify inductive reasoning.

Another justification could be found in introducing an additional strategy on how support inductive reasoning. Arguably, the chicken made an important mistake in its reasoning.

This mistake can be more apparent in the example of a man jumping off a tall building and at the 40th floor exclaiming: “So far, so good!” 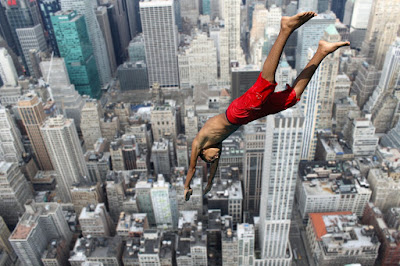 With every floor passed he got the confirmation that he’s surviving the jump (in the form of "I survived floor X; therefore I'll survive floor Y"). What he fails to take into account is the road beneath, which presents an unfortunate limit to his fall. Would he take that into account, he would not be so confident at the 40th floor.

The same goes for the chicken. If it would observe how the overall farm works, with several animals disappearing and so on, it would get a clearer picture about it’s relationship with the farmer. Then the chicken would get less and less confident that it will live another day, instead of the opposite.

This strategy of introducing additional considerations into your inductive reasoning, is what Hans Reichenbach (1891 - 1953) called “Cross-induction.”


This is basically what science does all the time. There are certain predictions that come with scientific theories, but then we try to refute those predictions. Using experiments, we try to examine all the instances where our induction fails to be successful.

And in this way we get better, more supported and therefore more reliable inductive inferences about the unobserved.

Now we can imagine the chicken, that understands its situation better, and gets pretty sceptical about it's breakfast. Every day it gets more confident that it will have to die soon. However, it failed to observe, or could not observe, the fact that meanwhile the farmer married a vegan wife, who wants him to focus on crops instead and leave the chicken be. At some point, the chicken will be most certain that this is the final day, even tho from our perspective we know that the farmer wont slaughter any animals on the farm. So, even if we introduce this strategy, it never leads to true knowledge.

But that’s okay. The chicken can observe some more, namely the fact that animals stopped disappearing, and draw another cross-induction, this time concluding that it wont get slaughtered. It will never know for sure. As said, the future is uncertain. But, frequently testing our inductive inferences and predictions about the future, we can make some pretty damn good guesses about it.