Occam's razor (and why we use it)

This post provides an explanation of Occam's razor and why we use it - again, it's basically a transcription of a video that I made a couple of months ago (feel free to check it out):

Suppose you hear a vase break.

You go to the living room and there's little Jimmy, next to the broken vase. He says that a cat did it.

But you don't even have a cat in this household.

So, Jimmy says, some cat must have sneaked in from the outside.

You remember closing all the windows and doors.

So, he says, it must have entered the house before you closed them.


You note that Jimmy is alergic to cats. You don't see him sneezing.

So, he says, it was a Spynx cat, which has no fur.

You go look for the cat but can't find it.

Jimmy says it already ran away by now.

This conversation, in principle, could go on forever. Every objection you would make can be countered with an »additional (or ad-hoc) hypothesis,« for example, at some point in the conversation, Jimmy could argue that »the cat somehow unlocked the door you remember locking« or even that »the cat is invisible.«

Before that would happen, you would probably tell Jimmy to stop with these explanations and draw the much simpler conclusion that he broke the vase. The cat explanation rests on too many conditions, which render it highly unlikely.

If you would do so, you would be acting in accordance with a philosophical rule of thumb, named Occam's razor after the scholastic philosopher William of Ockham (c. 1287 - 1347).

The rule can be summed up as following:

Why do we think that?

In the history of philosophy, there were different attempts to justify this reasoning. Prior to the 20th century, for example, it was commonly believed that nature itself is simple (so logically simpler hyptheses about nature are more likely to be true). This view often drew from theology. Aquinas, for example, wrote that: "Nature does not employ two instruments where one suffices."

Perhaps the most well-known instance of such a justification can be found in Copernicus’ rejection of the Ptolemaeus geocentric model of the solar system, which was a quite complex model in favour of a simpler model that put sun in the centre. Copernicus adopted Plato’s conception of celestial bodies as being perfect, and thereby they would have to display a perfect and simple kind of motion – one that is not to be found in the somehow chaotic Ptomelaeus geocentric model.

Fun fact: Copernicus’ model was simpler than the geocentric, but still quite complex and inadequate until Kepler introduced elliptical orbits a few decades later.

Since then philosophers have found more convincing justifications for using occam’s razor. One being a direct result of basic probability theory. By definition, all assumptions introduce possibilities for error; if an assumption does not improve the accuracy of a theory, its only effect is to increase the probability that the overall theory is wrong.

If we get back to little Jimmy and the broken vase: with every additional explanation he offered, the cat-theory increased in complexity. Meaning, it rested on an increasingly number of conditions that had to be met in order for the cat to break vase. The more conditions had to be met for something to happen, the less likely the theory will seem. 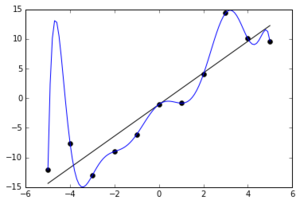 Another justification for occam’s razor rests on the observation that if we manage to simplify theoretical models in science, they get better at predicting future events. Simplicity, in this view, is a counter-weight or counterbalance, for the problem of over-fitting our theory to a particular set of data.

If we manage to deduce a simpler version of our theory, we can get rid of all the statistical noise of our experiments. Simpler models are generally better at predicting new and yet unobserved events.


In short, Occam’s razor continues to be an effective method of reasoning, both in science and every-day life.

Vesel, Matjaž. (2014). "Platonist Astronomer-Philosopher. Cosmic Order, the Movement of the Earth, and the Scientific Revolution."